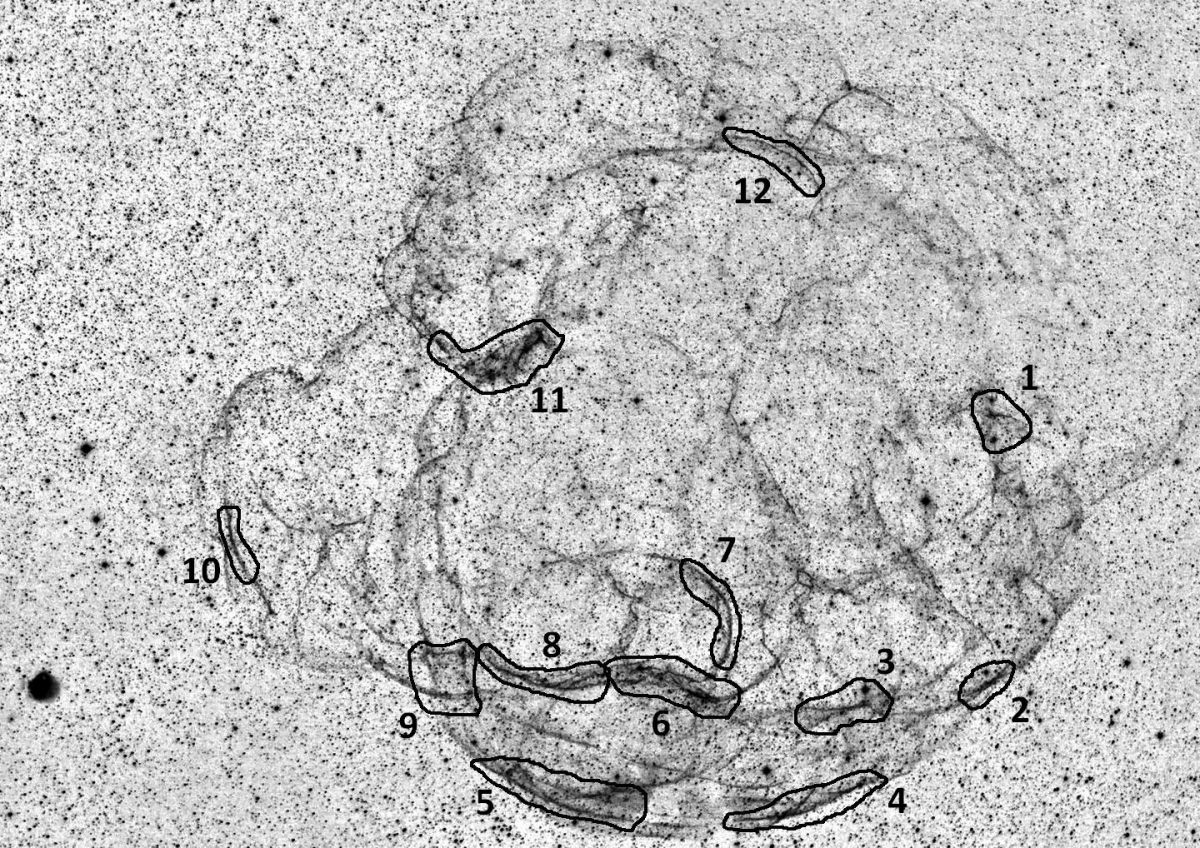 Sharpless 2-240 is a supernova remnant that is roughly 3,000 light-years away and 40,000 years old. It is 3.5° by 3.2° in size. While this supernova remnant was climbing much higher in the sky now, I spent nearly two hours picking out the brighter areas. I’ve searched and logged three of the brighter areas once before, but with the night being as good as it was, I went through and tried to tease more out of the huge object. Most times the filaments were visible without a filter. An Ultra-high contrast filter helped to isolate them more, but it didn’t really help to show more detail. All were seen with averted vision only at some level and usually seen best as the area moved into the Field of View and then lost for a bit once I stopped moving the scope. I started on the west side, star-hopping from beta Taurus, El Nath and worked my way around counterclockwise.

(1) The first piece seen was between mag 8.1 star SAO 77268 and 8.2 mag star SAO 77267. A thin thread running East/West about 3'-4' seemingly brighter nearer the E end. (2) Moving South, just SW of star SAO 77272 was a wider, more transparent strip running Northwest/Southeast for about 4'. (3) Sliding E about a FOV came to mag 6.5 star SAO 77322. Just S of this star is a wide strip that runs from just S of the star and extends about 15' straight E. (4) About a FOV south, there is a triangle of two 9th mag stars and a 10th mag star. SE of the S star of the trio is a short little piece that runs about 5' to the SE before diffusing out. But as soon as it fades, a few arcminutes further, it brightens again and stretches another 10' ESE. About midway, a thin thread crosses it running NW/SE. This thread can only be followed a minute or two N and S of the main strip. This intersection is 11' SSW of mag 6.4 star SAO 773350. (5) Moving E a FOV, 8th mag stars SAO 77398 and SAO 77429 come into view. Midway between them is a nice gauzy thread that runs E and then slightly curves to the NE. This can be followed for nearly 30'. (6) A FOV NW is 8th mag star SAO 77389. Several E/W running strips can be seen, on and off, through this area. About 15' SW of this star, two main threads split and are lost. (7) Moving another FOV N, the one thread can be traced running N/S for about 12' creating a gentle curve to the NE and then is lost again. (8) From 77389, a narrow strip can be traced E for about another 20' before it is lost. (9) Continuing E another FOV, E of 9.4 mag star SAO 77476, are several diffuse wide strips that run E/W and at least one that runs N/S. Difficult to detect and measure since they fade away as soon as they are concentrated on, but a almost crosspatch pattern can be seen. (10) Moving along the E side, a tiny little stripe can be seen about 15' W of 7th mag star SAO 77604. This is very subtle and best seen as you move over the area. (11) Moving back toward the center of Simeis 147, there are two 8th mag stars separated by 5', SAO 77498 and SAO 77495. Half a FOV W brings in a little clump of 10th and 11th mag stars that could be a loose open cluster. Through this cluster, NE and NW of it, is rough little patches that come and go moving through the area. A very thin thread can be traced to the NE about 7'. (12) At the NW edge of the nebula is 6th mag star SAO 77354. About half a FOV to the SW is a thin thread that runs NE/SW for about 15'. A pair of 10th mag stars lie immediately SE of this thread.

As I moved around from area to area, there were many other diffuse fragmented background glows that could be seen, but never enough to see any shape or detail. This is an amazing area to hunt around in and I will be going back and pulling more of the pieces out on the nights that allow it.